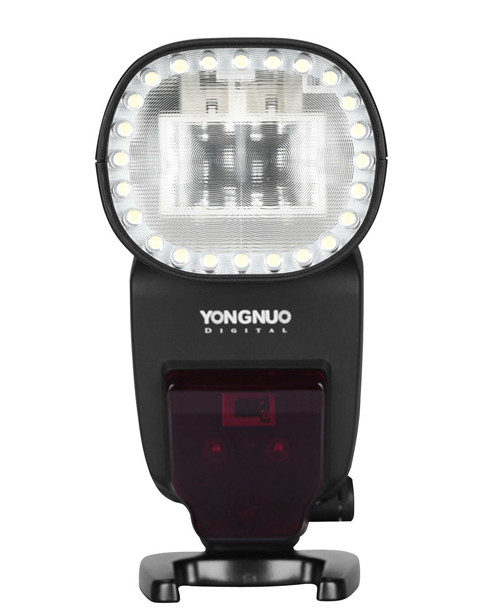 Yongnuo has launched a new and unique egg-shaped flashgun called the YN650EX-RF.

It is the first ‘RF’ flash from Yongnuo and the first (excluding the YN200) with a non-standard speedlight head. Unusually, the front of the head is an oval, making it a cross between a circular flash like the Profoto A10 (or Jinbei HD-2 Pro, Godox V1, or Triopo R1) and a more common rectangular fresnel.

What’s most interesting is the ring-shaped LED lamp, designed as a modelling light or for video shooting. The 24 diodes are arranged in a circle around the edge of the head, to produce ‘charming’ eye reflections in portraits and softer shadows. This contrasts with other Yongnuo speedlights with LED lamps that don’t even point in the same direction as the flash, and with other round-head flashes that have just one or two LEDs as a harsher ‘point source’ of light. Even the new Canon EL-1 just has two small diodes on the edge of the head.

The round-ish head should be a compromise between efficiency on-camera and smooth light falloff off-camera.

It is a shoe-mount flashgun for use on-camera with Canon E-TTL cameras, but also has a built-in 2.4GHz module compatible with the ‘Yongnuo 2.4GHz RF system’ both as a transmitter and as a receiver, so you can use it off-camera without attaching any external devices. Yongnuo’s radio systems are a bit fragmented, but the company has been trying to amalgamate them recently with products such as the YN560TX Pro. 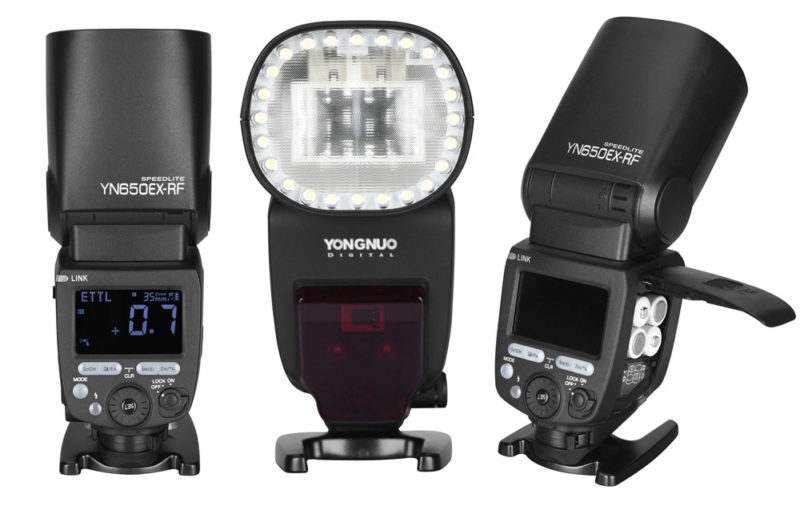 The ‘EX’ in the model name is pronounced ‘eggs’ because of the egg-shaped head. (Not really.)

As well as radio transmission, the Yongnuo YN650EX-RF works with Canon’s EX optical transmission system, either as a transmitter or as a receiver. Other legacy technology includes a Prontur-Compur (PC) sync socket on the side. Unusually for round(ish) flashes, this unit only takes AA batteries, but you can quicken the recycle speed and extend the operating time with an external battery pack (CP-E4 type connector). There is a micro-USB port for firmware updates.

There is a large LCD control panel on the back. Yongnuo is quietly moving all its flashes over to white-on-black displays, partly because it looks more swish but also because it can make the screen easier to read.

There’s no word yet on a price or a release date. When it goes on sale, the YN650EX-RF should be available at Yongnuo’s official Amazon store. Given the ‘EX’ naming, chances are this will only be available for Canon.