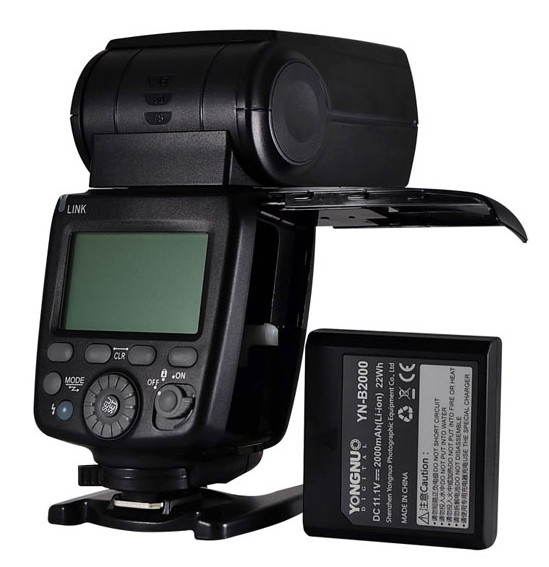 Chinese lighting manufacturer Yongnuo has announced a new flash, the Speedlite YN720. The YN720 is the company’s third lithium-powered flash announced in as many months, following the YN686EX-RT for Canon and the manual-control YN860Li.

Confusingly, Yongnuo’s latest device is very similar to the YN860Li, with some minor improvements to the specifications. The YN720 has a 2000 mAh lithium battery (versus 1800 mAh in the YN860), providing up to 750 full-power flashes on a single charge. The form factor is slightly different, with a larger screen and squarer body shape.

Otherwise, everything is pretty much the same: a guide number of 60, recycle time of 1.5 seconds, zoom control from 20â€“200mm and a built-in 2.4 GHz transceiver that allows the YN720 to trigger and be triggered by other manual flashes in Yongnuo’s wireless system. There is a USB port for firmware updates.

Interestingly, the manufacturer’s web site doesn’t list the YN860Li in the list of compatible flashes. There’s a chance this means that Yongnuo has cancelled release of the YN860Li in favour of the YN720, which has a bigger battery and otherwise very similar specs. I haven’t seen the YN860Li on sale on eBay or Amazon yet. However, the new YN560 TX II doesn’t appear either, so it could just be an oversight.

The Yongnuo YN-B2000 battery is the same one used in the YN686EX-RT. It is charged by the YN520 rapid charger. You can now find the battery and charger available separately for around $50 on Amazon and eBay.

There are LEDs on the front of the unit where an autofocus-assist lamp would normally be, but since the hotshoe only has a single electrical contact on it, this is probably a blinking LED to indicate the flash’s status when in radio slave mode.

Update: Yongnuo says both the YN860Li and YN720 will be released in November 2017. No word on pricing yet. For more information, visit the Yongnuo YN720 product page.